Partonopeus de Blois is a medieval French verse romance, composed in the last third of the twelfth century. It tells of how the young hero, Partonopeus, is transported to a mysterious city where he encounters the heroine Melior. He becomes her lover without ever seeing her, but eventually breaks the taboo on bringing a light into her bedchamber and is banished by her. After various adventures, he is forgiven, wins her hand in marriage at a three-day tournament, and becomes emperor of Byzantium. A continuation then tells the story of the hero’s former squire, Anselot, and of an unsuccessful invasion by Partonopeus’s former love-rival, the sultan of Persia. 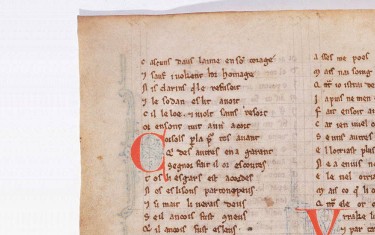 The Partonopeus de Blois Electronic Edition project was set up with the aim of creating a research tool that would facilitate comparative literary and linguistic studies of the different extant versions of this important twelfth-century text. Its purpose was not to produce a critical edition, but to provide researchers with full transcriptions of all the manuscript witnesses, together with software that would allow for effective searching and comparing of text. A key objective was to present the text of each MS without the type of editorial intervention that might involve value judgements as to its reliability or its place within a conventional stemma or any other schema of MS relationships. For this reason, designating any of the MSS as a base MS for purposes of comparison or collation has been carefully avoided, and no textual emendations have been made, however obvious they might seem.