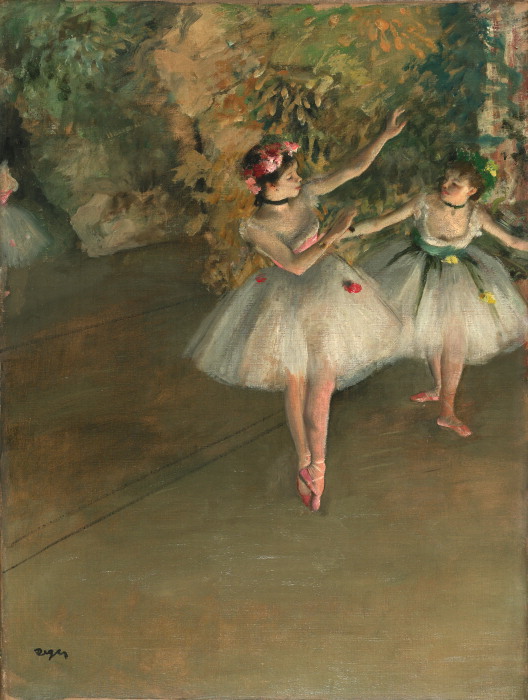 We see the stage here not straight on, but from above and to the side, as though we are sitting in a box. This angle immediately involves us in the image, suggesting Degas’ depiction to be real rather than carefully set up.

Is this a performance or a rehearsal? Degas purchased permits that allowed him to observe rehearsals and backstage activity at the Opéra de Paris, and many of his paintings and sculptures concentrate on dancers off the stage, stretching or chatting. Whilst the dancers in this painting are in full costume and mid-dance, a third figure, who does not seem to be part of the main action, is partially visible on the stage, at the far left of the canvas. Degas’ composition teeters between being casual and carefully constructed, as do the dancers themselves: in spite of their exquisite costumes, these are probably young working-class dancers from the corps de ballet as opposed to principals. Degas gives them snub noses and slightly simian features to suggest, according to contemporary ideas of physiognomy that greatly interested him, a lower social class.

Edgar Degas (1834-1917) was born into a wealthy family and his father had hoped that he would become a lawyer. However, Degas was more interested in art, which he pursued from an early age, converting a room in the family home into a studio. In 1853, he registered as a copyist at the Louvre, following in the footsteps of major academic artists and learning from ancient sculpture and the great Renaissance masters. In 1855, Degas met Jean-Auguste-Dominique Ingres, whose classical painting style he admired, and later that year he enrolled at the École des Beaux-Arts. Degas seemed set for a conventional career as a classicising academic artist. However by the 1870s he had departed from epic subject matter in favour of scenes representing contemporary life in Paris. He especially favoured washerwomen and dancers. He never completely rejected academic techniques, however, and the result is a painter who is known as an Impressionist but who continued to work in his studio and never in the outdoors.

For many years it was assumed that Degas’ depiction of two dancers on the stage did not represent any specific performance and was meant as a general representation of ballet. However recent research has shown that the costumes of the dancers, especially the one on the right, match the bell-shaped tutus and hairpieces with roses of the dancers in the Ballet des roses, a ballet section added to Mozart’s opera Don Giovanni (1787) for performances at the Paris Opera House from 1866 onwards. The scenery in the background suggests foliage, which would have been appropriate to the garden setting of the Ballet des roses. The new expanded version of Don Giovanni was performed more than fifty times at the Paris Opéra between 1872 and 1874, so Degas’ subject is very much engaged with contemporary life. The painting was shown at the dealer Durand-Ruel’s London gallery in 1874, where it was purchased by Captain Henry Hill of Brighton.

Degas is known as an Impressionist mainly because he exhibited with the other artists of that group, showing in all but one of their eight group shows and playing a key role in their organisation. Whilst he held a common interest in contemporary subject matter, he never adopted the out-of-doors practice of the other members of the Impressionist circle, and preparatory studies always played a part in his work. Nonetheless, the brushwork of his paintings is as varied as Monet’s, although his attention to details and his focus on the human figure means that he has more in common with Renoir. Degas was very interested in photography, taking his own photos from the 1880s.

In 1874, Degas’ father died, and it emerged that Degas’ brother René had built up enormous business debts. Degas was forced to sell the family home and his art collection. He suddenly became entirely financially dependent on sales of his own paintings.

Degas’ eyesight was found to be defective during rifle training at the start of the Franco-Prussian war in 1870, and it deteriorated throughout his life. Two Dancers on the Stage comes from the years during which he could still see clearly, but many of Degas’ later works use much broader brushstrokes and darker tones, perhaps due to his worsening eyesight.

Degas often used sculpture as a means of trying out ideas. On his death, he left a number of fragile wax sculptures in his studio: these were clearly never intended to be finished pieces in their own right, although they have now been cast in bronze and a number of them are in the Courtauld’s collection.