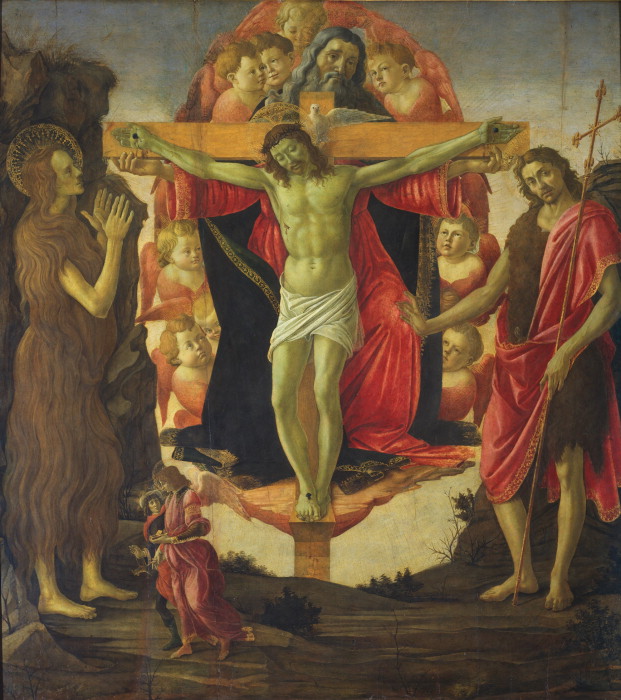 The Trinity with St Mary Magdalen and St John the Baptist, the Archangel Raphael and Tobias (1491 â€“ 94)

The painting seems to represent Christ’s crucifixion, but on close inspection it is clear that this image is rich in theological symbolism: Christ is part of the Holy Trinity, as the dove (representing the Holy Spirit) and God the Father hovering above. Saint John the Baptist, standing on the right, was beheaded some time before the Crucifixion and thus foreshadows Christ’s martyrdom. Finally, Mary Magdalen, the repentant courtesan, is a model for the sinners for whom Christ died.

In the foreground of the composition, represented on a smaller scale, is the Archangel Raphael accompanying Tobias, whose story is told in the Bible. Tobias had been sent on a journey to collect a debt owed to his elderly blind father, Tobit. On the way, he met the archangel in disguise, who guided the young boy and helped him to extract a fish from the river Tigris to cure his father’s blindness. The choices of Tobias and Raphael, like Mary Magdalen and the Trinity, have a special meaning here given the context for which this picture was made.

The painter Alessandro Filipepi (around 1444-1510), better known as Sandro Botticelli, lived and worked in Florence during what the first art historian Giorgio Vasari (1511-1574) would later describe as a ‘Golden Age’ for artists and men of talent.

Botticelli began his training as a goldsmith at the age of fourteen, but he is best known to us today as a painter. From 1470 until his death he had his own workshop on the Via Nuova, near the church of Santa Maria Novella. For many, his elegant pictures such as The Allegory of Spring (1482) and The Birth of Venus (around 1485, both in the Uffizi, Florence), encapsulate Renaissance Florence.

Vasari’s life of Botticelli suggests that his workshop was a convivial place, where the assistants would play tricks on each other but were well supported by the master.

Botticelli painted this altarpiece for the main altar of the church in a Florentine convent for penitent former prostitutes, Santa Elisabetta delle Convertite.

The choice of subject was closely connected to this convent and its redemptive mission.

Saint Augustine, the founder of the Augustinian order, to which the nuns belonged, was a key proponent of the doctrine of the Trinity. John the Baptist was the patron saint of Florence, and the patron of the convent was Mary Magdalen. Indeed, the convent’s coat of arms displayed Magdalen’s jar of ointment with which she washed Christ’s feet in penance.

Mary Magdalen’s former life as a prostitute and Christ’s forgiveness of her were held up as an inspiration for the women who lived under the austere care of the order: the implication was that the Crucifixion took place as much for them as for any other sinners. Just as Tobias accepts Raphael’s guidance through the harsh, craggy terrain depicted by Botticelli, so the penitent women were encouraged to accept guidance and correction from the Bible and from Christ’s teaching.

The panel on which the picture is painted is made of six planks of poplar, of varying widths. They were originally glued together but a split, visible between the fourth and fifth planks, has been repaired with wooden ‘butterflies’ recessed into the back.

The composition was entirely conceived by Botticelli himself, but as with most works of the period, the painting is the work of many hands. The cherubs, for example, were most likely painted by his workshop assistants.

Infrared images reveal that changes were made to the composition, undoubtedly by the master himself. The figures of Tobias and Raphael originally featured to the right of the base of the cross, where there is now a tree branch protruding from the rocky crags up to the sky; they were depicted amongst a landscape that included a distant mountain, a bridge and a river.

The more prominent placement of the figures of Tobias and Raphael was a late addition, perhaps made at the request of a patron. This could also explain the strange difference in scale with the rest of the figures.

Four small panels, now in the Philadelphia Museum of Art, may originally have sat beneath this altarpiece, forming a ‘predella’ or base. They depict scenes from the life of Mary Magdalen, and the style of the figures in these small panels matches Tobias and Raphael in the large panel. It is possible that Filippino Lippi was involved in their production.

This is the only altarpiece by Botticelli in a British collection: It was purchased in Rome, and the local authorities were very reluctant to allow the painting to be exported. It was eventually permitted to join Lord Wimborne’s collection in England in 1867.

Look carefully at the figure of John the Baptist and count the toes on his left foot! Did Botticelli really include a sixth toe? It is far more likely that this is the mistake of a Victorian restorer, who may have misinterpreted the original image and turned the edge of the foot into an extra toe.

The Trinity with St Mary Magdalen and St John the Baptist, the Archangel Raphael and Tobias | Sandro Botticelli (Alessandro Filipeppi)