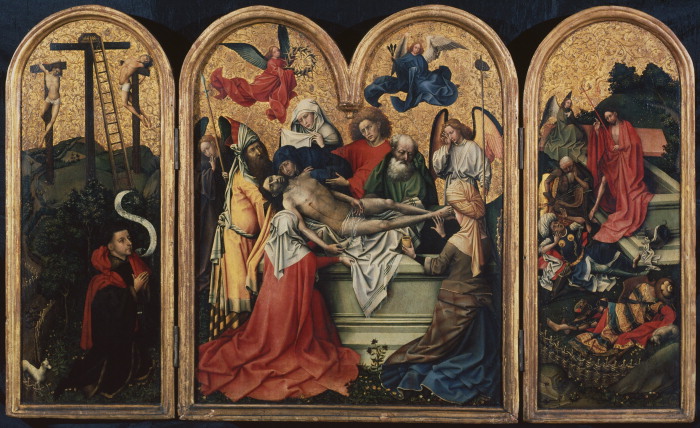 The triptych represents three scenes from the Passion of Christ. On the left panel, Christ’s body has been removed from the cross whilst the two thieves crucified with him remain, twisted in agony. In the foreground, a ‘donor’ is shown in prayer, accompanied by a dog (a symbol of faithfulness). Donors usually represent the person who commissioned the painting, and the fifteenth-century costume of this donor clearly identifies him as the painter’s contemporary.

In the central panel, Christ’s followers place his body into a tomb, which resembles an altar: the pattern of vines and grapes that decorates the gold-leaf background reinforces the link to Holy Communion, where the priests drink wine, a symbol of the blood of Christ.

Around Christ’s body stand Joseph of Arimathea (in yellow), who gave Christ the tomb he had prepared for himself; Mary, the mother of Christ, in the blue headdress; John the Evangelist, the unbearded figure who supports Mary; saint Veronica, believed to have wiped Christ’s face with her veil on his way to Calvary, and Nicodemus, a Jewish scholar who once came to seek Jesus’ advice. Mary Magdalen anoints Jesus’s feet with perfume, and angels hold objects from the Crucifixion, such as the crown of thorns and the three nails used on the cross.

The right hand panel shows the next episode in the story: Jesus rising from the dead, to the astonishment of the three guards in Middle-Eastern attire.

Who is ‘the Master of Flémalle’?

In the nineteenth century, a large number of paintings presumed to be by the great Netherlandish painter Rogier van der Weyden (around 1400-64) were carefully re-assessed. This process led to the creation of a subset group of works that seemed to be by a different, but extremely gifted, painter. Due to the stylistic similarity to several paintings inaccurately presumed to have come from Flémalle, a city in southeast Belgium, the author of these works was named the ‘Master of Flémalle’.

But who is the talented artist hiding behind this appellation?

The answer to this question is the subject of ongoing debate. In 1909, the name of Robert Campin was put forward and this identification has generally been accepted. Campin was active in Tournai, in western Belgium, as a master painter and the head of a large workshop from 1406 to 1444. While Campin’s life is well documented through archival records, no works securely attributed to him are known.

Our triptych can therefore be assigned to Campin only based on its superlative quality and similarities with the works of his pupils. Indeed, Rogier van der Weyden was for a time an assistant in his studio, which would explain why their works had, for so many centuries, been conflated.

The triptych (three-panelled painting) was a common format in this period. It allowed the artist to represent several episodes of a narrative. The piece is too small to be a church altarpiece, so it was probably intended to be displayed in the donor’s home for personal contemplation and devotion.

The intricate details mean that there is always something new to discover. Notice, for example, that the fence appears in all three panels, uniting them with a simple landscape detail.

The triptych was created at a moment of transition: the use of gilding in the background and intricate patterns recall medieval preferences, while the careful modelling of the figures, the use of perspective and foreshortening, especially in the bodies of the guards on the right, demonstrate the influence of Renaissance ideals about the naturalistic representation of the human body and of space.

The panels of the triptych are made of oak, and they are carefully shaped and hinged so that the whole object can be folded in on itself, to protect the painted surface and to make it easier to transport.

There seems to be the remains of some painting in grisaille (tones of grey that would often be used to create the effect of sculpture) on the back of the panels. Perhaps the artist originally intended to decorate these so that the object could be displayed closed as well as open.

The painting is undertaken in a mixture of traditional egg-based tempera (mineral pigments mixed with yolk) and the new technique of oil paint: the oils would have given the artist great flexibility as they dried slowly, whilst the tempera would have been useful for intricate detail – for example if you look very closely, you may be able to make out the red-rimmed eyes of the mourners in the central panel.

Look closely at the drapery of the soldier in the foreground of the Resurrection panel. It is decorated with characters that resemble letters from the Hebrew alphabet. However, they do not spell out anything, nor are they really identifiable. They therefore have a mainly decorative function, but are also symbolic: they serve to identify the soldier as an exotic figure.

When open, the side panels were intended to be angled, so that the donor in the left panel would be looking directly at the body of Christ in the central panel and the resurrected Christ on the right would be looking at the kneeling figure of Mary Magdalen.

The Seilern Triptych - The Entombment | Master of FlÃ©malle (Attributed to Robert Campin?)