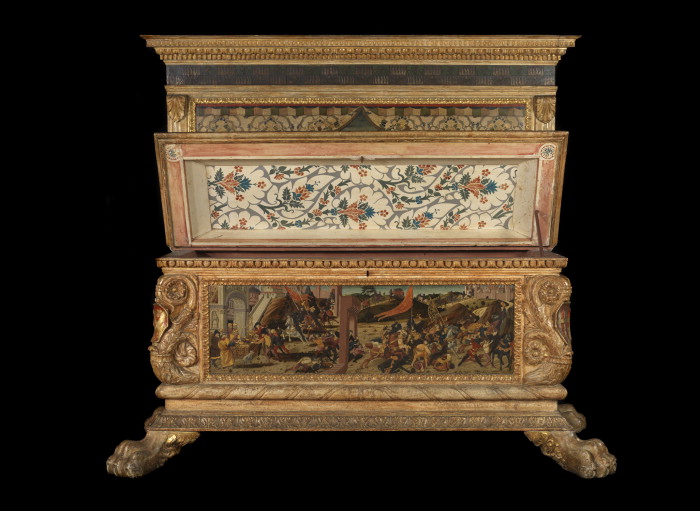 These two chests were commissioned by Lorenzo di Matteo di Morelli on the occasion of his marriage to Vaggia Nerli in 1472.

The painted panels depict stories, taken from Livy’s History of Rome. Across the left-hand chest, the story unfolds of the virtuous Roman general and statesman Camillus expelling the Gauls from Rome; the spalliera (decorative panel) above depicts Horatius Cocles defending Rome.

On the front panel of the second chest, we see the bad schoolmaster of Falerii, who offered his pupils as hostages to the Romans. He was confronted by Camillus and whipped as punishment by his pupils. The accompanying spalliera portrays Mucius Scaevola, who killed for his country and accepted just punishment; his courage and devotion to Rome make him a heroic figure.

So, why put stories from ancient Roman history on the side of a fifteenth century Florentine marriage chest?

Lorenzo di Matteo di Morelli would have chosen the stories himself, for the morals they represented that would be seen daily by his new wife and their prospective children. Morelli is reminded to follow famous examples of protection and honour in the leadership of his household, Vaggia Nerli is taught to be fair, patient and devoted in her care of Morelli’s children (unlike the wicked schoolmaster) and the children in turn are encouraged to be virtuous like the pupils.

As modern viewers, we often expect that a masterpiece is the work of a single genius artist, working alone and giving shape to his or her vision. However, artists in fifteenth-century Italy often worked in collaboration. Chests such as these would require the skills of a carpenter, a woodcarver, a gilder and one or more painters.

Zanobi di Domenico (active around 1464-74) was a trained wood carver, whilst Biagio di Antonio (1446-1516) and Jacopo del Sellaio (1441-93) were responsible for the painted imagery on the front and sides of the chests (cassoni) and the decorative panels (spalliere) that accompany them. Jacopo del Sellaio was a pupil of Fra’ Filippo Lippi at the same time as Sandro Botticelli, and he and Biagio di Antonio painted the Morelli-Nerli chests together in a workshop in the Loggia dei Pilli, Florence.

The chests were commissioned by Lorenzo di Matteo di Morelli on the occasion of his marriage to Vaggia Nerli in 1472. Marriage ceremonies in fifteenth century Florence took place in two parts: the initial betrothal, followed some months later by the marriage itself, at which point the groom would take his bride home, complete with her dowry.

Morelli was a ‘patrician’, a member of the elite classes, and these chests would have been commissioned in part to display his wealth and preserve his name: the Morelli and Nerli coats of arms are included in the carving on the corners of the chests.

The chests are made of poplar, and were structurally complete before any ornamentation was added.

The paintings were undertaken in egg tempera, an earlier medium than oil paint, whereby powdered pigment was mixed with egg yolk. Egg tempera can produce highly detailed and intricate designs, dries quickly and often looks quite flat when compared with oil painting; it is very long-lasting, hence the quality of these chests even today.

Most of the carving is original, although the garland designs seem to have been added later – perhaps as a conservation measure.

However the ornate lion’s feet on which the chests stand seem very out of place. Morelli had originally commissioned the chests to be on a base. These are a nineteenth century addition, and their style reflects their Victorian collectors’ understanding of the Renaissance.

When Vasari, a major renaissance art historian, referred to chests like these as ‘cassoni’ in his Lives of the Artists, he implied them to be a minor art form compared with wall paintings. It was not until the nineteenth century that people began to seriously collect them.

Leon Battista Alberti (1404-72), a Florentine theorist, wrote a treatise called On the Family, in which a young wife is instructed on suitable contents for cassoni: dresses and textiles were appropriate, whereas chickens and oil were not!

The decorative patterns inside the lids of the chest, and the patterns of the painted curtains on the outside, would have reflected the types of linens that may have been stored inside.

If you look carefully at the front of the chests, you will see some wear and tear around the keyholes, a result of bunches of keys left swinging in the locks.