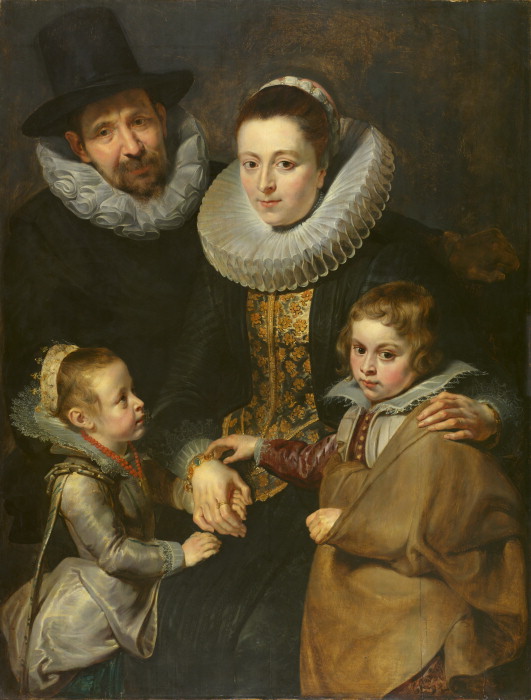 Jan Brueghel (1568-1625), the son of Pieter Bruegel the Elder (1525-1569), was in his mid-forties when this painting was completed. This portrait shows him with his wife, Catharina van Marienberg, and their two eldest children, Peter and Elisabeth.

A number of aspects of the picture draw the family together and reveal their intimacy: notice the intertwined hands at the centre. The gentle smile and tilted head of Jan Brueghel in the upper left lend the composition an air of informality, whilst the rich clothing and jewellery suggest that the family is respectable and wealthy. The bracelets worn by Catharina are her betrothal bracelets, and their place at the centre of the composition reinforces the importance of both marriage and the family unit.

Elisabeth’s coral necklace is of a type commonly given to children since antiquity as it was believed to ward off evil spirits; the addition of a cross to the typical coral beads is suggestive of the family’s Catholic faith.

How does this intimate painting of a family group fit with Rubens’ other work? The answer must lie in Rubens’ close friendship and collaboration with Jan Brueghel – this may well have been painted as a gift.

Peter Paul Rubens (1577-1640) was not just a highly skilled painter: he was also a diplomat, courtier and scholar.

Raised and trained in Antwerp, he became a ‘master painter’ in the guild of Saint Luke in 1598, at the age of just twenty-one. In 1600, he travelled to Italy, where he stayed until 1608, serving as court painter to the Duke of Mantua.

In Italy, he was able to study the masters of the Italian Renaissance, from Michelangelo to Raphael and Titian, and antique sculpture. It had a key influence on Rubens, who claimed that ‘in order to achieve the highest perfection in painting, it is necessary to understand the antiques’.

The exquisite three-dimensionality of antique statues and the challenge of translating it into two-dimensional works inspired Rubens to focus on the modelling, flesh, motion and contortions of the human body in his paintings, whether they be religious or mythological. The paintings in this room demonstrate this to the full. However Rubens’ friends and fellow artists remained important to him, as can be seen through the subject of this painting.

It is important to remember that Jan Brueghel was a painter himself.

Yet this painting is far removed from more casual representations of artists at work in the studio surrounded by brushes. Instead, it is suggestive of a new tendency to treat artists as intellectuals rather than ‘simple’ craftsmen.

In the early 17th century, the Spanish Hapsburg governors of the Southern Netherlands were Archduke Albert and Archduchess Isabella, and it was whilst both Rubens and Jan Brueghel were working as court painters that Rubens painted this portrait, although this, like Rubens’ sensitive drawing of his young wife, Helena Fourment (around 1630-31, also in the Courtauld collection) must have been a personal project rather than intended for his patrons.

Why is Catharina at the centre of the composition instead of her husband Jan? What can we make of the blurred and shadowy nature of Jan’s hand, which rests on Catharina’s shoulder? And why does Rubens leave so much blank space in the top right corner?

All these clues point to the fact than an early version of the painting includes only Catharina and the two children – Jan, it seems, was a late addition. This would account for the balanced triangle formed by the mother and children, which is set off centre by the addition of the father, and for the black under-paint that shows through the hastily added flesh colour of the hand.

Whilst we cannot know whether it was Rubens or Brueghel who chose the late change, this indicates that the painting is first and foremost about Brueghel’s family rather than his personal status or appearance. The painting is completed on panel rather than canvas. Canvas was preferred for large-scale canvases that needed to be transported (Rubens worked for royal courts throughout Europe). This work however was to remain close to where it was created.

Jan Brueghel and Rubens were not just friends: they also collaborated on a number of paintings. Rubens was best at figures, whilst Brueghel specialised in the intricate and often small-scale depiction of landscapes, flowers, animals and still life elements. Far from devaluing the paintings, these collaborations between two talented painters in their own right were highly sought after. This was different from the collaboration of workshop assistants on a picture: having two masters involved made the paintings doubly precious.

Jan Brueghel the Elder is often known as ‘Velvet Brueghel’ for his skill at painting rich and delicate textures; this nickname also distinguishes him from the other painters in his family

In around 1616-17, the Archduke Albert and Archduchess Isabella commissioned Rubens and Brueghel to jointly paint their portraits – the paintings are now in the collection of the Prado, Madrid. The double portrait format reflects the joint input of the two painters, and perhaps even implies Rubens and Brueghel’s collaboration as artists to be comparable to Albert and Isabella’s partnership as spouses and governors.

The Family of Jan Brueghel the Elder | Peter Paul Rubens