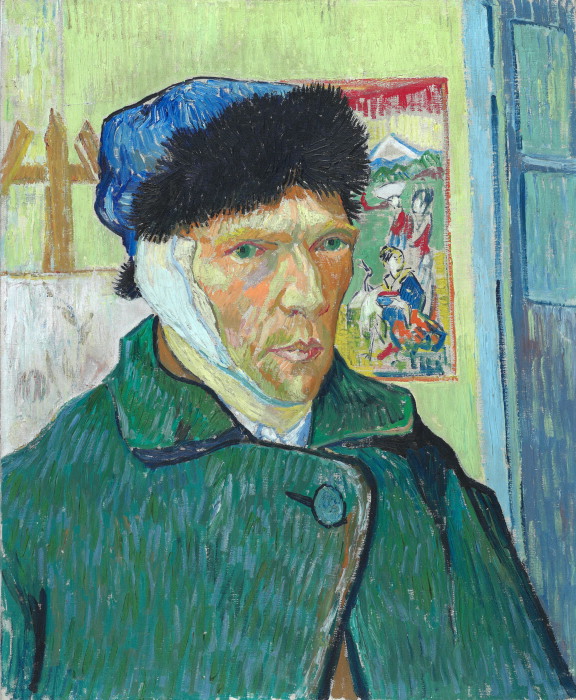 This self-portrait was painted shortly after Van Gogh returned home from hospital having mutilated his own ear. The prominent bandage shows that the context of this event is important.

Van Gogh depicts himself in his studio, wearing his overcoat and a hat. Is it cold in the studio, or is this a sign of a lack of permanence?

His facial expression is still and melancholy, as though he is contemplating his position as an artist, and yet the composition is confidently constructed.

On the left, a blank canvas suggests that there is more work to come from this artist, as indeed there was, and a Japanese print on the right relates to one of his great enthusiasms. This is a manipulated copy of a real print by Sato Torakiyo, which Van Gogh owned and had pinned up in his studio. In order to fit his own face into the composition, Van Gogh has shifted the figures and Mount Fuji across to the right. Japan, much like Arles, was an exotic place of escape in Van Gogh’s imagination, and the two are condensed here, much as they are in The Crau at Arles: Peach Trees in Blossom (1889), also in the Courtauld’s collection, in which a snow-capped mountain in the background seems to recall Mount Fuji.

Vincent Van Gogh (1853-90) is one of the most mythologised artists of the nineteenth century.

Many explanations of his work focus on his mental instability. The importance of this to his painting style is debatable, although Van Gogh did lead a somewhat tormented life.

He was born in Groot-Zundert, in the Southern Netherlands, a predominantly Catholic area of the country, where his father was a minister of the Dutch Reformed Church.

Vincent hoped to follow in his footsteps, working as a missionary and living a frugal lifestyle, but he failed his theological exams.

He travelled between The Hague, London, Paris, Amsterdam and Antwerp and gradually developed as an artist, using his money on materials, absinthe and smoking rather than on food, and becoming ill as a result.

His first show took place in 1885 in The Hague, and in 1886 he moved to train and work in Paris, living with his brother Theo, who was a constant correspondent and supporter of Vincent. From Paris, Van Gogh moved to Arles, in southern France, with the intention of setting up an artists’ community, centred on what he called ‘The Yellow House’.

Gauguin joined Van Gogh at The Yellow House in October 1888, and the two lived and worked under the same roof for two months.

They had intense discussions about art, Van Gogh seeing much value in painting from nature whilst Gauguin prioritised the invention of the imagination.

The two painted together and often tackled similar subjects. However their relationship became increasingly strained, and in December Gauguin wrote to his dealer, Vincent’s brother Theo, that he would be returning to Paris. Theo, it seems, became engaged to be married on 21 December 1888.

It is likely that Van Gogh had heard about this, an event which threatened to change his own life. On 23 December, he mutilated his ear and presented the severed part to a local prostitute.

Was it Gauguin’s threat of leaving, Theo’s engagement or simply Vincent’s own instability that led him to such an action?

Whatever the truth, he never saw Gauguin again after the incident, although they continued to exchange letters. Still Life with a Bandaged Ear makes overt reference to the events that led up to its execution.

Van Gogh’s characteristic long brushstrokes run vertically – only in the hat and facial features do they sometimes seem to curve or swirl.

This is a very controlled painting, although the clashing colours used in the face seem to suggest turmoil. These colours seem to be original, although Van Gogh often used unstable pigments that changed colour over time: the cadmium yellow of the background, for example, has turned grey brown in places due to a chemical alteration.

Van Gogh’s technique has often been described as expressionistic, but this expression comes from a closely observed version of nature.

He, like Cézanne, was described by the British twentieth-century art critic Roger Fry as a ‘Post-Impressionist’, and his use of strong outlines and regular brushstrokes does separate him from the earlier generation of Impressionists.

Close examination of the white paint on the bare canvas that sits on the easel suggests that Van Gogh may have planned to depict another Japanese figure there in a red pigment that has faded due to mixing with the white. Japan, like Arles, had been an ideal which was now all but shattered, and Van Gogh’s erasure of Japan from his easel seems evocative.

Van Gogh’s interest in Japanese prints was something he had in common with artists such as Monet.

However a sinister link might also be made between Van Gogh’s actions and the Japanese custom of shinju, a culture of refined prostitution based on the mutual exchange of love tokens. This escalated from love letters, often sealed with drops of blood, to snippets of hair, finger nails and even severed fingers. Van Gogh described the part of his ear that he handed to the prostitute Rachel as a ‘precious’ object to be treasured. It is hard to know whether Van Gogh can have been aware of this link.

On the night of 23 December 1888, Gauguin had been concerned by Van Gogh’s behaviour and had decided to spend the night in a hotel. When he returned to the Yellow House the next morning, he found that the police suspected him of mutilating his friend. If Gauguin is to be believed, the police seemed initially to think that Van Gogh was dead, and it was only on Gauguin’s suggestion that he was taken to hospital.