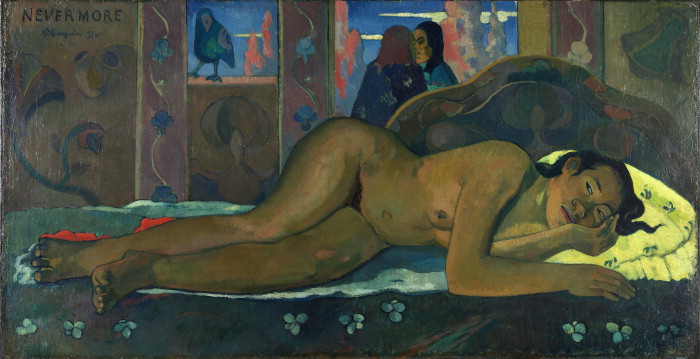 The dinner held in honour of Gauguin before his departure for Tahiti in 1891 included the recitation of Edgar Allan Poe’s poem The Raven (1845), in which the bird of the title, visiting a poet on a cold winter evening, repeatedly croaks “Nevermore”. Although Gauguin denied that the “bird of the devil” in the background of his painting bore any resemblance to Poe’s ominous creation, the inscription in the upper left is a clear reference to the poem and a reminder of Gauguin’s erudition and wide ranging interests.

Gauguin wrote to his friend and dealer Daniel de Monfreid that with Nevermore, he intended to use a ‘simple nude’ to suggest ‘a certain savage luxuriousness of a bygone age’. Gauguin viewed the painted surface itself as ‘luxurious’. His model was Pahura, his ‘vahiné’ (Tahitian wife). The setting however is not one of lust but of unease. Are the two figures behind the headboard innocent bystanders, lecherous visitors or malevolent spirits? Their status is left deliberately unclear.

In 1895, Paul Gauguin (1848-1903) definitively left Paris to settle in Tahiti, the culmination of several attempts to flee civilisation in pursuit of a more authentic and timeless world. He had previously worked at Pont-Aven, an artists’ colony in Brittany, and with Van Gogh in Arles in the south of France.

Despite Gauguin’s desire to flee Paris, Nevermore very much stems from European painting traditions, of which Gauguin would have been fully aware. The reclining figure evokes both Renaissance female nudes by the Venetian artist Titian and more recent works, such as Ingres’s Grande Odalisque of 1814 (Louvre, Paris).

Ingres’s masterpiece also depicts exotic luxury but does so with a serene, sumptuous figure surrounded by opulent fabrics, who returns our gaze invitingly. Manet also picked up this tradition in his notorious depiction of a nude courtesan in Olympia (1863, Musée d’Orsay, Paris), whose direct confrontational gaze asserts her power. The flatness and anxiety of Gauguin’s figure, turned fully and vulnerably towards us, seems quite the opposite. Perhaps the vulnerability of this figure is suggestive of the broader context for this painting: that of Tahiti’s relationship to France, a colony under the yoke of a powerful European power.

Gauguin’s image of Tahiti is a myth, the fabrication of traditional décor and dress covering over the gradual disappearance of Tahitian identity into, as Gauguin put it, ‘a bygone age’.

In Gauguin’s canvases, broad areas of flat colour are contoured by dark outlines, rendering the whole canvas more decorative than representative. Gauguin’s use of colour was quite cunning however: the flash of red on the lips of the reclining figure finds an echo in the red fabric at her feet, uniting the width of the composition. Standing out from the overall flatness of the painting is the big toe of the figure’s left foot, which seems to protrude into our space.

Gauguin painted Nevermore on top of another, very different composition. Thanks to an infrared scanner able to penetrate the paint surface and reveal the underlayers, it is possible to discern an elaborate tropical landscape, framed by palm trees on the left and a thick trunk on the right. The body of a horse is visible at the centre (on the belly of the reclining figure) and a chicken appears amidst vegetation below her forearm. In the background, an L-shaped hut with three small windows can be discerned to the left of a tall tree (these are visible behind the headboard). This setting recalls contemporary paintings like No te aha oe riri (1896, The Art Institute of Chicago). Why Gauguin decided to abandon the already elaborate composition is unknown.

-    The British composer Frederick Delius (1862-1934) purchased Nevermore from Daniel de Monfreid in 1898 for 500 francs. Gauguin wrote to Monfreid, ‘you did well to let Delius have the picture Nevermore. You remember that you reproached me for having given a title to the picture. Don’t you think that the title ‘Nevermore’ was the cause of the purchase, perhaps?’

-    This picture was painted in late February 1897, shortly after the death of Gauguin's newborn child with his ‘vahiné’ or companion, Pahura. Gauguin’s European daughter Aline also died around that time and Gauguin received news of her passing in April 1897. He was so distressed that he tried to commit suicide shortly thereafter, by drinking arsenic. His body rejected the poison and his attempt failed. Movingly, wanting to leave a lasting legacy before taking his life, Gauguin painted some of his most powerful canvases at that period.