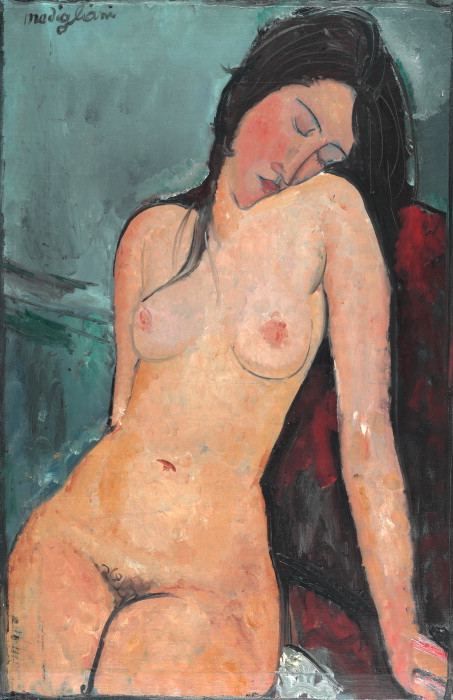 Female Nude is typical of Modigliani’s style. The strong outline and flat surface texture seem to contrast with the serene expression on the woman’s face and with the soft rounded forms of her breasts.

Whilst her pose seems to recall the classicising art of Ingres, her almond-shaped eyes and elongated nose recall the features of the African dance masks that Modigliani admired. His appropriation of those features here is symptomatic of a phenomenon known as Primitivism: the adoption of the art of cultures understood to be less civilised or affected than Europe in order to fuse a fresh, modern and exciting style.

Do the woman’s closed eyes suggest that she is dreaming? The sensual effect of her expression is reinforced by the red of her lips and cheeks, which in turn reflects the red of her nipples and of the drapery that hangs over what is perhaps a chair back behind her.

To her right, a diagonal line that comes just below her shoulder suggests the dado rail of a Parisian interior, although no background details are allowed to detract from the simplicity and purity of the female form.

He went to Paris in 1906, and found accommodation along with artists such as Picasso and Derain in the rickety Bateau Lavoir studios in Montmartre. Derain, who had been a key Fauve artist along with Matisse, was developing an interest in the art of non-western cultures: Modigliani would undoubtedly have seen his Gabon Fang dance mask, just one of many such objects that were popular in Paris at the time.

Modigliani met the sculptor Brancusi in 1909, and this spurred him to create a number of his own sculptures. He moved down to Montparnasse, which at that point was on the southern outskirts of Paris, and for a while in 1912 lived at the La Ruche studio complex.

Whilst he knew all the main artists, poets and critics of the time, Modigliani subscribed to none of the artistic movements that sprang up, instead developing and retaining an individual style mainly focused on the female figure.

Modigliani was not the only artist in Paris to be interested in or influenced by the forms of non-western art.

Artists from Picasso to Brancusi and Derain were appropriating it in their own ways, and many collectors, including poets such as Guillaume Apollinaire, were purchasing pieces at auction or at flea markets.

Modigliani’s dealer, Paul Guillaume, held an exhibition called Art nègre (Negro Art) in his home in 1919. Not intended to be offensive, the fashion for Primitive art represented an avant-garde desire to reject academic conventions and constraints and to return to something unspoilt and authentic, however mythical this might be.

Female Nude was shown in an exhibition at the Berthe Weill Gallery in Paris in December 1917, where it was censored, along with many of the other paintings, and the show closed by the police.

What could have been so offensive? The answer must lie in Modigliani’s depiction of pubic hair, still a taboo despite the centuries-old tradition of painting nudes. Hair was expected to appear only on the head!

Modigliani never painted the women he knew personally or had relationships with unclothed: his nudes were based on professional models, young housemaids or waitresses.

His female nudes share so much in common that they practically work as a series: consistent features include the oval head, wide hips, almond-shaped eyes, long thin nose and small pursed mouth, all of which he uses here.

These canvases come to represent an obsessive abstracted ideal of ‘woman’ rather than real individuals, which perhaps makes them more sensuous than they might otherwise be.

Look carefully at the woman’s hair in Female Nude. Whilst a wisp of hair has been brushed over the woman’s right shoulder, the lines that delineate strands of hair nearer to her central parting have been created in a very different way.

It seems as though Modigliani has used the hard end of his brush to scrape a line into the black paint whilst it is still wet, revealing the grey beneath and adding texture. This gestural technique seems to chime with the Primitivism that Modigliani sought to embrace.

When Modigliani died of tuberculosis at the age of 35, his mistress Jeanne Hébuterne, who was pregnant with their second child, committed suicide the next day.

This was the latest painting that Samuel Courtauld purchased: he was never interested in the work of Modigliani’s contemporaries such as the Cubists or the Surrealists. Courtauld bought this canvas in 1931 from Léopold Zborowski, Modigliani’s primary dealer and friend during his later years.

It is important to remember that Modigliani was Italian, however unlike his Italian contemporaries the Futurists, who had vetoed the painting of nudes by modern artists, he did not declare war on the Renaissance traditions of his country. Rather he chose to renew and revise them, fusing traditional subjects and forms with modern techniques and ideas.