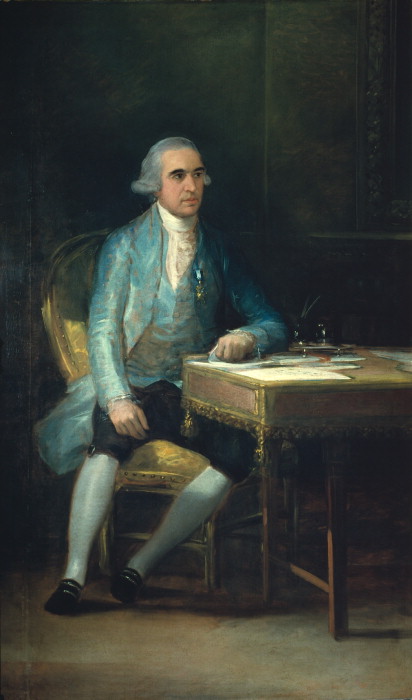 Goya depicts Charles IV’s former Minister of Finance, Francisco de Saavedra, as a respectable and ‘well-regulated’ gentleman in the English style – ironic, given Saavedra’s previous work against Britain in Cuba and Jamaica during the American Revolutionary war!

His clothing is fashionable but understated and the richness with which his jacket is painted contrasts with the relatively simple setting of the painting.

Saavedra’s desk is covered with papers and an inkwell, suggesting that he is conscientious in his work. He looks not at the viewer, but out in the distance, his expression serious and his eyes almost glazed over as if deep in contemplation. The medal on his jacket both lends him status as an official member of the court and has a compositional purpose, its gilt edges chiming with the colour of the desk and chair.

Goya has signed the painting along the front edge of the desk: ‘Saavedra por Goya’.

Francisco de Goya (1746-1828) was born in Fuendetodos, in the Aragón region in north-eastern Spain. He studied in Madrid under Anton Raphael Mengs, a German painter who worked for the Spanish court.

Mengs might have been able to kick-start Goya’s career but the two did not see eye to eye and Goya failed his exams. He was rejected from the Royal Academy of Fine Arts and left for Rome.

Upon his return, Goya secured commissions to paint fresco cycles in a church and palace in Zaragoza, where his family had a house. He started to make a name for himself designing tapestries for the Royal Tapestry Factory, and was eventually granted access to the Royal Academy.

Members of the Royal Court commissioned him to paint their portraits and he finally took up a salaried position as painter to Charles III in 1786, later becoming First Court Painter under Charles IV in 1799.

Whilst his portrait of Don Saavedra relates to his official work, Goya also experimented in varied media, and his famous set of fantastic and often nightmarish etchings, Caprichos, was published in 1799.

The composition of Saavedra’s portrait is very similar to that of Goya’s painting of Saavedra’s friend and colleague, the Spanish liberal Gaspar Jovellanos, now in the Prado, Madrid.

The links between the two men and the context for the paintings reveal political turmoil beneath the shimmering surface. Saaavedra had been appointed as Minister of Finance in 1797, due to his friend Jovellanos’ influence, and Jovellanos himself became Secretary of State at the same time.

Neither man would last long in their position. Both were in opposition to Manuel Godoy, a favourite of the Queen, and they all but disappeared from public view in August 1798. Saavedra was formally dismissed the following February.

Thus this painting, commissioned as a portrait of the current Minister of Finance in the spring of 1798 turned out, when it was completed later that year, to be commemorative.

Whilst the effect from a distance is one of carefully painted silk, you will notice that this texture is in fact created by leaving areas of terracotta priming showing through the oil paint.

This would have been a relatively unusual and casual gesture for the time, and perhaps this can help us to reconcile Goya the experimental artist, so admired by modern painters such as Picasso, with a portrait painter who may seem at first glance to be traditional and conservative.

The style of the portrait relates it to British portrait traditions, and this may have been a choice either of Goya or of Saavedra. The portrait was made in Goya’s official capacity, but beneath the surface we can discern a great deal of Goya’s individual character.

In 1792, Goya became deaf after contracting an unknown serious illness. Speculation on the nature of his illness has included a series of small strokes, Ménières disease or progressive dementia due to the pressure of an undiagnosed brain tumour. It was during his recovery that he began painting much darker and more imaginary images.

Saavedra’s liberal politics and his dismissal from the Spanish Court are interesting given Goya’s own future involvement in politics. When France invaded Spain in 1808, sparking the Peninsular War, Goya painted the events in some of his powerful canvases. He also painted pictures for French patrons and sympathisers; when the Spanish king Ferdinand IV was restored in 1814, Goya was no longer welcome at court. In 1824, disillusioned by the monarchy’s anti-liberal stance, Goya left Spain for Bordeaux where he died.