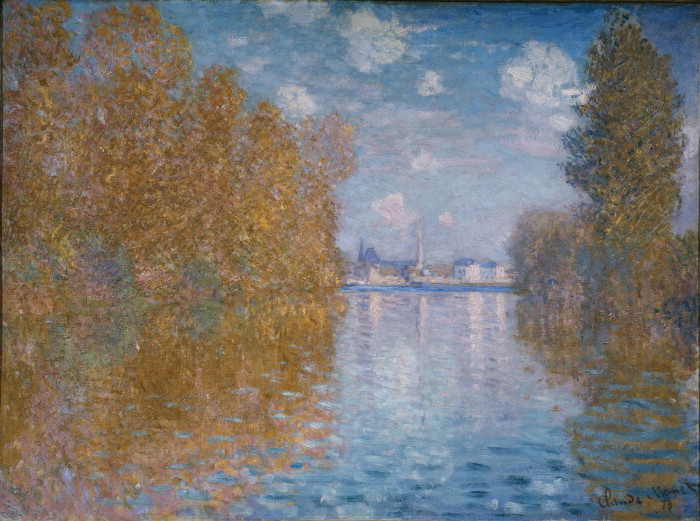 The subject matter of the painting is in many ways mundane: Monet depicted the small town of Argenteuil seen from a branch of the river Seine. The thick blue stripe running horizontally marks the main stream of the river. Behind it are houses and a church spire whose verticality is echoed by the white chimney of a factory. The smoke it emits merges into the clouds above.

However, Monet’s focus is less on the modern city than the effects of the seasons, the reflections on the water, and the array of colours in the trees – from orange and pink to purple and green – , all evidence of his careful observation of fleeting moments.

Claude Monet (1840-1926) is perhaps the most famous of all the Impressionist painters. Indeed it was his painting, Impression Sunrise (1872, Musée Marmottan, Paris) that gained Monet and his contemporaries, including Renoir, Degas, Sisley and Pissarro, the initially disparaging title of ‘Impressionists’ when they exhibited together for the first time in 1874, independently of the official Paris Salon.

Monet had grown up between Paris and Normandy, and it was on the beaches of Normandy, under the instruction of Eugène Boudin, that he learnt to use oil paints and to work en plein air (in the open air). Monet moved to England during the Franco-Prussian war (1870-71), where he saw firsthand works by John Constable and JMW Turner. He was influenced by their respective interests in local, familiar subject matter, and in the effects of light and natural phenomena. When he returned to France in late 1871, he moved with his wife and young son to Argenteuil, a small town eleven kilometres west of Paris along the river Seine.

The arrival of the railway in 1851 turned Argenteuil into a popular destination for Parisian day-trippers, seeking the pleasures of boating in a somewhat rural setting. However, by the 1870s, Argenteuil was turning into an industrial city, with tanneries, chemical plants and the vast Joly ironworks visible from the banks of the river.

This painting was shown at the Second Impressionist Exhibition in 1876, and critics varied in their reactions: for some, the bright hues made the painting an ‘eastern fairytale’, whilst for others it was artificial and overdone. For the poet Stéphane Mallarmé, it was a triumph. He commented that ‘Claude Monet loves water, and it is his special gift to portray its mobility and transparency, be it sea or river, grey and monotonous or coloured by the sky.’ This was one of many canvases that Monet painted of Argenteuil whilst he lived there from 1872 to 1877.

Monet painted this composition from his bateau atelier, a small boat that he had outfitted for use as a studio from 1872. In this way, he was able to paint outdoors while being protected from the elements. His brush marks in this work are extremely varied but this was not an especially quickly executed painting; it is much ‘tighter’ and more fully worked than the sketchy canvases of Monet’s later career.

This is one of the first pictures in which Monet completely rejects black paint: there are no firm outlines, and the shapes are created from patches of colour alone, which would become a hallmark of Impressionist painting. Look closely at the trees on the right hand side of the canvas: you will notice a number of diagonal lines scratched into the surface of the paint, revealing the light grey priming underneath. Is this damage? This seems unlikely. Rather, Monet used the handle of his brush to scratch into the paint once it was dry, cutting through the density of the paint layers to add variations in texture.

Monet was not the first artist to make use of a floating studio. The ‘Barbizon’ painter, Charles François Daubigny, was fascinated by the prospects of painting from nature, and he acquired a boat in 1857. He called it ‘Le Botin’ (Little Box). Daubigny painted on the rivers Seine, Marne and Oise, focusing on the beauty of the natural landscape and creating nostalgic, idyllic views of what he saw around him.