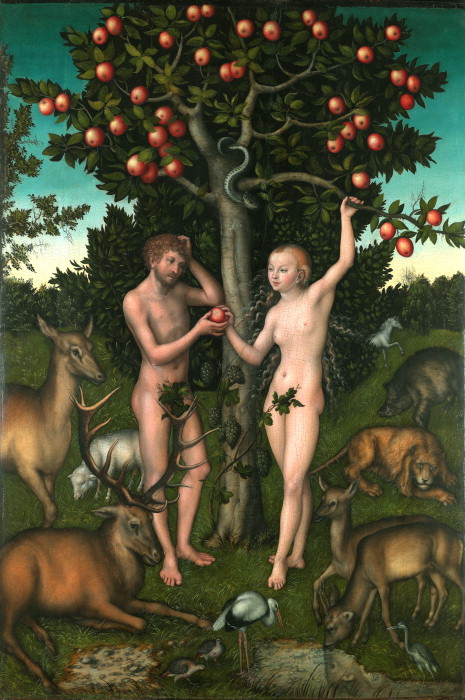 Cranach depicts the Garden of Eden at the moment just before Adam's fall into temptation: Eve has taken an apple from the tree and hands it to Adam, who scratches his head as though considering whether or not he should accept it.

The lighting of the picture suggests dusk, and in turn the impending end of an era of innocence. The serpent coils around the tree branches, whilst below, covering Adam and Eve’s shame even before the fall, is a vine – a symbol of Christ and his sacrifice for the sin of the world.

Christ’s identity may also be implied through both the lamb (Jesus was described as the sacrificial ‘lamb of God’) and the lion (Jesus was of the line of Judah, symbolised by a lion). However such pairings of animals that usually prey on one another further reinforces the sense of harmony in this earthly paradise. True to Lutheran theology, the painting could just as well represent the new heaven, described in Revelation and attainable only through Christ’s death and resurrection, as the Eden of Genesis.

Lucas Cranach the Elder (1472-1553) was born in Kronach, Germany, and it is from the name of his home town that his surname is taken.

We know very little for certain of his early life, although he visited Vienna in 1502 and in 1505 was appointed court painter to Frederick the Wise, Elector of Saxony, a position he held for the rest of his life.

The Saxon court was in Wittenberg, officially known as Lutherstadt since 1538 because of the close connections between the court and the Protestant Reformation. Cranach was a great supporter of the Reformation and was a close friend of Martin Luther (1483-1546), who was godfather to Cranach’s daughter Anna, born in 1520. His religious paintings reflect this loyalty.

The use of animals as symbols relates the painting back to Medieval bestiaries, in which animals were accompanied by a short verse suggesting their symbolic nature.

However at the same time, Cranach’s animals are carefully modelled according to the conventions of the Renaissance and naturalistically painted in minute detail, showing that he often studied them from life or from stuffed examples held in his workshop.

Whilst he had never seen a lion (this must have been painted from pictures), the roe deer in the foreground is recognisable to the exact species, which is faithful to one mate. Here, drinking from the stream, it also recalls Psalm 42, which compares a parched deer to the longing of the Christian soul for God.

The painting was almost certainly intended for a domestic setting, where the symbolism and the intricate details could have inspired both careful looking and theological discussion.

The theological depth that Cranach incorporates into what initially seems to be a straightforward narrative is exemplary of the intellectual and devout context in which he was working: it is possible that the patron may have been a Christian Humanist from Wittenberg University, where Cranach had important friends.

Cranach had a large workshop with many assistants, and the Courtauld’s Adam and Eve is perhaps the most inventive of over fifty paintings of the same subject.

Cranach’s techniques and his attitude to the workshop system are intriguing. The size of this panel is the second largest of six standard sizes being used in Cranach’s workshop from 1520 to 1535. The use of standard sizes was a new phenomenon, and an economical and efficient one: carpenters could produce them independently and in advance of specific commissions, allowing Cranach’s workshop to keep up with demand; to the same end, the workshop often repeated motifs from one composition to another.

Two compositional studies survive for this painting, suggesting that it was a carefully designed composition before Cranach made the under-drawing on the panel. Nevertheless, infrared images reveal that he did make occasional changes as he went along. It also seems as though Cranach (or his assistants) completed all areas requiring the same pigment in one go, another efficient process.

The painting is signed near the top of the tree trunk, just below the serpent’s head, not with Cranach’s own initials, but with the symbol of his workshop: a winged serpent and the date.

Cranach used the same female body type in his portraits, as well as for images of Venus and the Virgin Mary. With its elongated limbs, thin waist and small breasts, it differs significantly from the one used by Cranach’s Italian contemporaries,

A tax return from 1528 states that Cranach was one of the two richest men in Wittenberg. His fortune came not only from painting, but also from businesses, such as his control of the apothecaries and his joint ownership of a printing press.