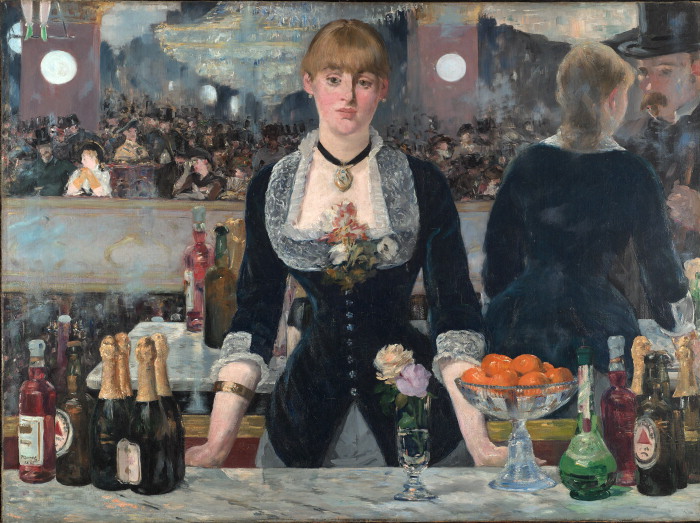 The rich still-life of champagne bottles, fruits and flowers in the foreground and the bright chandeliers and lunar electric lights that illuminate the crowd in the background set this representation in an opulent, bustling and modern interior.

The Folies-Bergère was the largest café-concert in Paris, an establishment that provided dinner and musical entertainment, with drinks available all evening from various bars. Attractions also included a circus act, and the two green marks in the upper left-hand corner of the painting are the boots of a trapeze artist. Given the venue’s huge popularity, the buzz was as much on stage as in the room.

Manet’s choice of viewpoint is confusing at first glance. The painter focused on one of the bars, which he placed on the mezzanine above the main hall, a reconstruction that apparently does not reflect the true spatial arrangement at the time. The bars were located on the ground floor but Manet must have wanted to include a view of the Folies-Bergère’s famous horseshoe-shaped promenoir. In addition, he has deliberately confused the viewer’s sense of place by representing all the activity in the room indirectly, through a reflection in the vast mirror behind the barmaid. The accuracy of that reflection has been much disputed: the gilt border in the lower part of the composition suggests that the mirror is parallel to the picture plane, while the barmaid’s reflection, as well as that of her customer, is off centre.

Édouard Manet (1832-1883) came from an affluent family and wanted to become a naval officer. After failing the entrance exams, he turned to art, for which he demonstrated great talent from an early age. Aged eighteen, he entered the studio of Thomas Couture, the most important academic painter of the period.

Manet’s relationship with the artistic establishment in Paris was complex: he pursued challenging and subversive work and encouraged the rebellious approach of the group of slightly younger artists that would become the Impressionists. Yet, he refused to exhibit alongside them in independent exhibitions and maintained his connections with the official art world, submitting paintings to the annual exhibition of contemporary art, the Salon.

Two paintings in particular stand out in Manet’s oeuvre as disrupting the Parisian art world’s sense of tradition and standards. Submitted for display at the 1863 Salon, Le Déjeuner sur l’herbe (1863, Musée d’Orsay, Paris) was rejected for its sketchy brushwork and the juxtaposition of a nude woman and clothed men. Olympia (also 1863, Musée d’Orsay, Paris) was accepted at the 1865 Salon but caused a scandal for its harsh outlines, its depiction of a brazen courtesan and the overt parodying of an iconic Renaissance painting, Titian’s Venus of Urbino (1538, Uffizi, Florence).

A Bar at the Folies-Bergère was Manet’s last major painting, undertaken when he was very ill and almost invalid. It was shown in the 1882 Salon and was still in his studio when Manet died in 1883. He managed to capture a fleeting sense of modern life in Paris and, at the same time, create a painting that has endured in its popularity since its creation.

The 19th-century writer Guy de Maupassant visited the Folies-Bergère and described seeing “a painted tribe of prostitutes on the prowl”. Whilst there would indeed have been actual prostitutes seeking custom, many strata of modern Parisian society are represented here.

The barmaid is of a lower class than the people she serves. Her cheeks are reddened by an evening’s work, her facial expression seems melancholy, and her hands are un-gloved, a sign of her status as a working girl and perhaps also of availability. She leans towards the top-hatted man, who may be simply purchasing a drink, perhaps something for later in the evening as well: the world of barmaids, artists’ models and prostitutes often overlapped, as girls who sold goods or themselves. In light of this, the marble slab of the bar that cuts across the foreground and makes the woman unattainable seems to be an ironic and fragile barrier.

The model used here was a genuine employee of the Folies-Bergère. Named Suzon, she posed for Manet in his studio behind a carefully reconstructed bar.

Far from being quickly and spontaneously painted, the composition was the result of careful preparatory studies. However, that is not to say that Manet did not make changes as he painted. In an x-ray of the final canvas, we can see that Manet initially painted the barmaid with her arms crossed across her waist, her left hand clasping her right arm above the wrist. This gesture emphasised her glovelessness, but is also one of protection. The woman in the background looking through opera glasses was a late addition.

1. An x-ray of the final canvas

-    Manet paid great attention to the labels on the bottles in the painting. On the far left, he signed his name and dated the painting on the label of a bottle of red-coloured absinthe. Just to the right of this is a bottle of English Bass beer. Bars that served such imported drinks were considered exotic and given the name bars américains (American Bars).

-    The Folies-Bergère, located in the centre of Paris, remains an active venue for concerts, variety shows and films today. Its name is composed of the 18th-century term for fanciful structures erected by aristocrats to house evening entertainment, concerts and ballets (‘folies’, which gave the English word ‘folly’) and the name of a nearby street (rue Bergère) to situate it easily in Paris.

1. 'Picture for Women' by Jeff Wall

A Bar at the Folies-Bergère | Edouard Manet